The tick is considered the most dangerous arthropod in the United States because of its ability to transmit diseases such as Lyme disease and Rocky Mountain spotted fever. The most common ticks that vector diseases include the blacklegged tick (or deer tick), brown dog tick, American dog tick, and lone star tick. During late spring and early summer the populations of many tick species peak and both humans and animals are at the greatest risk for contracting tick-borne diseases.

Researchers study ticks to aid in developing prevention and treatments for tick-borne diseases, and also  investigate their insertion mechanics, means of attachment, and mechanics for sucking blood. In contrast to mosquitos that possess mouthparts that resemble a hypodermic needle, the mouthparts of ticks are outfitted with two sets of sharp hooks that pierce skin. These hooks pull the skin apart, allowing ticks to burrow within. Once these hook-like appendages pull back the skin, a tick will insert its hypostome, which looks like a chainsaw with hooks along its edges and keeps ticks secured to the skin.

This month we imaged an American dog tick and also captured an isolated high-resolution view of the mouthparts of a lone star tick (Amblyomma Americanum) using the SkyScan 2214 nano-CT. For inspecting microscopic features within small insects, the submicron resolution of the SkyScan 2214 captures the insect with a remarkable level of detail.

Each tick was harvested alive from a dog and sent to the Micro Photonics Imaging Laboratory for examination. Prior to imaging, both ticks were immersed in a 0.3% phosphotungstic acid (PTA) solution for a few hours to improve soft tissue contrast. After contrast enhancement, each was also dried using a hexamethyldisilazine (HMDS) solution following standard chemical drying protocols.

As shown in Figure 2, the SkyScan 2214 nano-CT captured fine details both on the surface level of the sample but more importantly within the musculature and internal viscera of the dog tick. The contrast existing within the soft tissues is the result of the use of both PTA and HMDS in the sample preparation process. Without the addition of this contrast agent and drying agent, the internal structures of the sample would likely remain unresolved from a lack of contrast, even at the 1500nm voxel size used in this acquisition.

Bruker CTVox allows us to move through the dataset visually as a 3D volume and explore the musculature and other internal structures (Figure 3).

The head and especially the mouthparts are of primary interest when examining ticks for scientific purposes, especially when related to biomimicry applications. Using the SkyScan 2214 nano-CT we focused imaging our second sample, the lone star tick, on only the head and moved down to 700 nm for our isotropic voxel size (Figure 4). 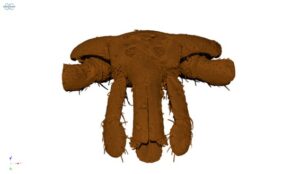 When exploring the submicron imaging results for the lone star tick head in CTVox, we see great detail on the eye structures of the insect and in particular the prominent hook structures that are evident when examining the mouth (Figure 5). Ticks use these barbed mouthparts to persistently attach to their host and complicate removal.

The subicron resolution of the SkyScan 2214 nano-CT was a perfect match obtaining high resolution data both throughout a tick sample as well as within a specific region, such as the head.

Would you like your work to be featured in our monthly newsletter? If so, please contact us by calling Seth Hogg at 610-366-7103 or e-mailing seth.hogg@microphotonics.com.

﻿   Nutmeg is a key ingredient in fall and winter seasonal dishes, especially in

X-ray Microscopic Examination of a Beetle

Beetles are the largest insect order, with Tribolium castaneum as the first species with a

Manufacturer
looking for a US partner?

We use cookies on our website to give you the most relevant experience by remembering your preferences and repeat visits. By clicking “Accept All”, you consent to the use of ALL the cookies. However, you may visit "Cookie Settings" to provide a controlled consent. Read more.
Cookie SettingsAccept All
Manage consent

This website uses cookies to improve your experience while you navigate through the website. Out of these, the cookies that are categorized as necessary are stored on your browser as they are essential for the working of basic functionalities of the website. We also use third-party cookies that help us analyze and understand how you use this website. These cookies will be stored in your browser only with your consent. You also have the option to opt-out of these cookies. But opting out of some of these cookies may affect your browsing experience.
Necessary Always Enabled
Necessary cookies are absolutely essential for the website to function properly. These cookies ensure basic functionalities and security features of the website, anonymously.
Functional
Functional cookies help to perform certain functionalities like sharing the content of the website on social media platforms, collect feedbacks, and other third-party features.
Performance
Performance cookies are used to understand and analyze the key performance indexes of the website which helps in delivering a better user experience for the visitors.
Analytics
Analytical cookies are used to understand how visitors interact with the website. These cookies help provide information on metrics the number of visitors, bounce rate, traffic source, etc.
Advertisement
Advertisement cookies are used to provide visitors with relevant ads and marketing campaigns. These cookies track visitors across websites and collect information to provide customized ads.
Others
Other uncategorized cookies are those that are being analyzed and have not been classified into a category as yet.
SAVE & ACCEPT

Customer access to tips and instructional videos, method notes, tutorials, application notes, and other content to support your research.

While we are not currently looking to fill a specific position at Micro Photonics, if helping others advance their research is something you are passionate about, then feel free to send us your resume so that we can keep it for further considerations when a position does become available.

Due to Covid-19 restrictions, we will not be attending tradeshows in the near future. We are participating in webinars and virtual tradeshows and will post links to those as they are available.

; To personalize your experience (your information helps us to better respond to your individual needs).

; To process transactions. Your information, whether public or private, will not be sold, exchanged, transferred, or given to any other company for any reason whatsoever, without your consent, other than for the express purpose of delivering the purchased product or service requested.

; To send periodic emails .The email address you provide for order processing, will only be used to send you information and updates pertaining to your order.Note: If at any time you would like to unsubscribe from receiving future emails, we include detailed unsubscribe instructions at the bottom of each email.

Introduction. Welcome to www.microphotonics.com. This website is owned and operated by Micro Photonics Inc. By visiting our website and accessing the information, resources, services, products, and tools we provide, you understand and agree to accept and adhere to the following terms and conditions as stated in this policy (hereafter referred to as ‘User Agreement’), along with the terms and conditions as stated in our Privacy Policy (please refer to the Privacy Policy section below for more information).

We reserve the right to change this User Agreement from time to time without notice. You acknowledge and agree that it is your responsibility to review this User Agreement periodically to familiarize yourself with any modifications. Your continued use of this site after such modifications will constitute acknowledgment and agreement of the modified terms and conditions.

Responsible Use and Conduct. By visiting our website and accessing the information, resources, services, products, and tools we provide for you, either directly or indirectly (hereafter referred to as ‘Resources’), you agree to use these Resources only for the purposes intended as permitted by (a) the terms of this User Agreement, (b) the terms of any applicable confidentiality, non-disclosure, or other agreement between you and a third party, and (c) applicable laws, regulations and generally accepted online practices or guidelines.